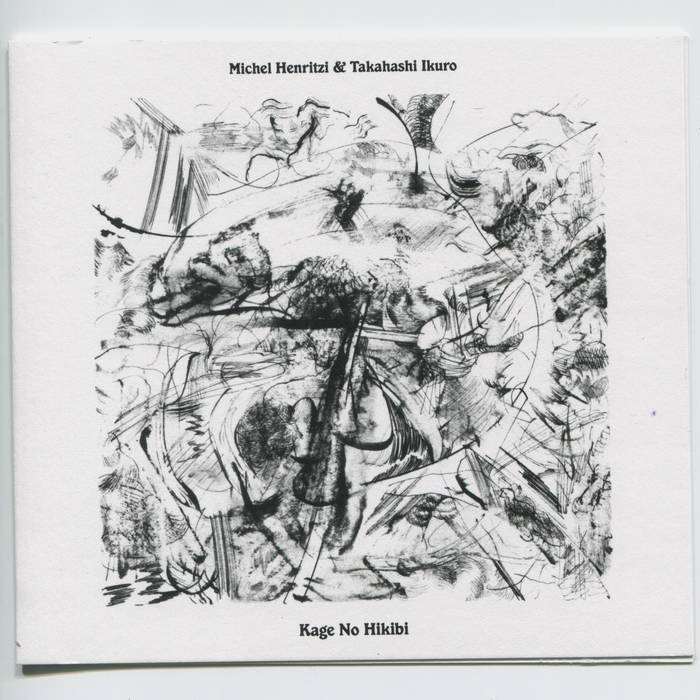 "In May 2018, Takahashi Ikuro and Michel Henritzi toured together in Europe, performing together as a duo on three occasions, in Antwerp, Brussels and lastly in Strasbourg: the concert presented in this recording.

To our knowledge here in Strasbourg, Michel was born in the late 50’s in Metz, is known to play very loud for short periods of time, to end his concerts by whipping his lap-steel guitar to shreds with the aid of a violin bow, to create hauntingly beautiful landscapes of sound despite the presence of several distortion pedals under his toes, to serve as an ambassador for experimental Japanese musicians in France, to write for music magazines, to have run several record labels, and to have a day job as a postman.

As for Ikuro, we don’t know much about him other than that he was born around the same time as Michel, has played in a number of psychedelic Japanese rock bands in the 70’s, that before the concert he paced around the Diamant d’Or’s garden meditating, sketching a quiet smile to those whose eyes met his, that he and Michel spoke no word whatsoever to one another before the gig concerning what or how they would play, and that once it was time to play, he took out a small clock from his bag before turning into a kind of vessel, channelling a flux of abstract rhythmic energy into his drum kit, and began, with Michel, to spark life from string, skin, stick and bow.

Unfortunately I was very silly when it came to recording the concert, and was so taken with the sounds being made that I had the bad idea of zooming in and out of the different sources, moving the microphones from guitar amp to cymbal to kick drum… After many unsuccessful attempts to make it sound right, we sent the sound to Cyril Meysson in St Étienne, who did good work putting body and space back into our thin digital recording. All this to say that while this recording won’t give you the real-life live experience, if you lay down, turn out the lights and put headphones on, it should give you a good ride nonetheless.

As for the artwork, to buckle the buckle, we called upon Strasbourg based illustrator and musician Baptiste Filippi, who organised the concert in question and drew the poster for it, to ask if he would give us a few of his drawings to use. He gave us three: one for the drums, one for the lap-steel, and one for the two mixed together.

The drawings, like the music, are fluid and full of movement. They draw a dance that weaves together shadow with water; a story where figures appear and disappear, here with a whisper of cymbals, here with an explosion of strings. The landscape is harsh and haunting; wheels of moon and sun, light and shadow, spin through stone and river, speaking the words Kage No Hikibi— the sound of shadows."
— Ross Heselton, January 2020

Bandcamp Daily  your guide to the world of Bandcamp